This week, engineers from Hyndburn Council were called out to clear blocked drains and gullies on a busy road to a hospital.

The engineers’ visit was as a result of the condemnation of the carriageway by Labour Councillor, Glen Harrison.

He stated, “The county council is reactive but not very good at being proactive.  The state of the drains and gullies makes Lottice Lane dangerous. They need to solve this with proper storm drains.”

A county council spokesman said that the drainage system along Lottice Lane had recently been cleaned.  He also stated that minor repair work to the gully frames had been carried out.

However, Cllr Harrison shot back that this was, “simply not efficient and a waste of taxpayers’ money.”

Many roads in Lancashire suffer poor drainage, causing hazardous driving conditions for many road users.  Blocked drains and gullies are reported regularly.  Often, reports appear to be ignored, and where work is carried out, the standard to which it is performed can be inefficient.  Often, no improvement whatsoever is seen in flooding in the affected areas.

The spokesperson for the council replied that they were aware of the ongoing issues, and that a CCTV drain survey was due to take place within the next month.

Fortunately, if you have issues with blocked or damaged drains on your personal property, there’s no need to wait months for the council to take action!

We will get to you as soon as possible.  For emergency callouts, we will be with you within 24 hours.  We can usually clear blocked drains immediately upon our arrival.  However, should the issue be a little more complicated, we will let you know how much it’s going to cost before we proceed with the work.

As seen in Hyndburn, blocked and damaged drains can start as a minor inconvenience, but can end up as a serious problem.

In the case of blockages at home, blocked drains can easily become an overflowing loo, which can lead to a flooded bathroom, and no one wants that.

Get a CCTV Drain Survey in Manchester 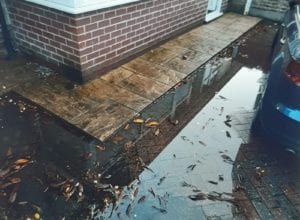 SM Drains have 16 years of experience in unblocking and repairing the drains of Manchester.  We are leaders in CCTV drain surveys.

Our advanced CCTV technology means that you will hopefully never have to get further down the road than a bit of minor inconvenience due to blocked drains at home.  As soon as you suspect something may be amiss, just give SM Drains a call.  We’ll have you back to normal in no time, with no chance of any ongoing issues, such as those left by the council.

If you’re struggling with blocked or damaged drains anywhere in the Manchester area, give us a call on 07751 139514 or send us a message today.